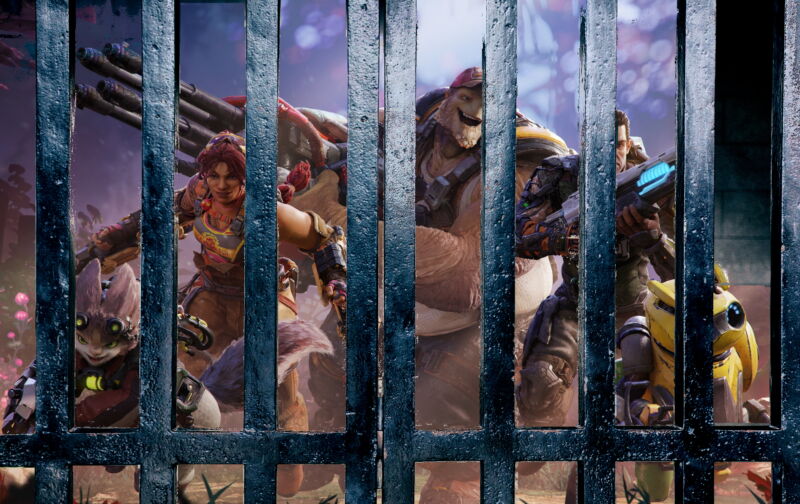 Enlarge / Crucible is going back into a “closed beta” cell starting July 1. (credit: Amazon / Getty Images / Sam Machkovech)
Less than two months after the formal launch of Amazon Games’ first major PC game on Steam, Crucible, the company has chosen to yank it right out of Steam’s store. Its developers at Relentless Studios (a wholly owned Amazon subsidiary) have announced plans to delist the free-to-play action-MOBA game from Steam starting tomorrow, July 1, while continuing to operate the game as a “closed beta” for anyone who already downloaded the game (or paid for one of its “founders packs” of cosmetic DLC).
In an announcement on the game’s official site, its developers describe this change as a way to “help us focus on providing the best possible experience for our players.” As far as remaining players go, however, that assurance may ring a bit hollow, since its delisting will likely reduce the available player pool from its already minuscule population (as of press time, it’s only had more than 200 concurrent players once over the past week).
Although the game will continue to launch through Steam, starting at 12pm on July 1, new players will no longer be able to search for the game and freely download its client. Instead, they’ll have to sign up to play the game at the official site, where they will wait for a closed-beta invite. (If you think you’ll want to play the game eventually and want to save yourself some headaches, head to Crucible‘s Steam listing and add it to your library right now.)Read 4 remaining paragraphs | Comments